Mainstream economists and TV talking heads tell us that the current slowdown in economic activity is ‘transitory’. Not to worry, they say, it’s just a slow patch.

The problem with this argument is that there is no evidence of transitory…the bad numbers keep rolling in. Yesterday, the Johnson-Redbook, the retail industry’s bible, reported a 2.8% plunge in Same-Store-Sales for the first part of April, the worst April report since 2005. This ugly piece of news followed right after the Bank of America reported weak credit and debit card data.

The ‘untransitory’ nature of the retail slowdown is still not visible to retail investors. RTH, the retail ETF, is just 4% below its 52 week high. This industry will make a great short when reality begins to dawn in their tiny little minds.

Here’s the Redbook data for the month of April, going back to 1996:

And below is the BofA data on card use (a three-month moving average of month-over-month results, seasonally adjusted). The trend is clearly down: 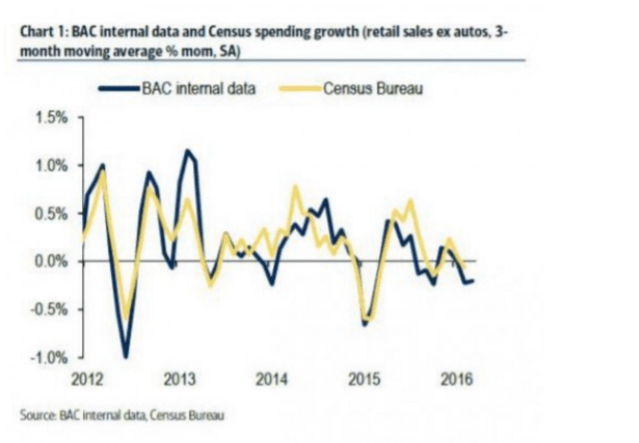 Q1 GDP estimates are weak and getting weaker, as we have reported, for one very good reason: consumer spending remains slow and there are no signs of improvement.