As I recently predicted (see my November 2 post), the bond market appears to have cracked. As Bloomberg calculates, more than $1 trillion was wiped off the value of bonds around the world this week and if the U.S. bond market had been open today (it’s closed for Veterans’ Day), the losses would probably be even greater. 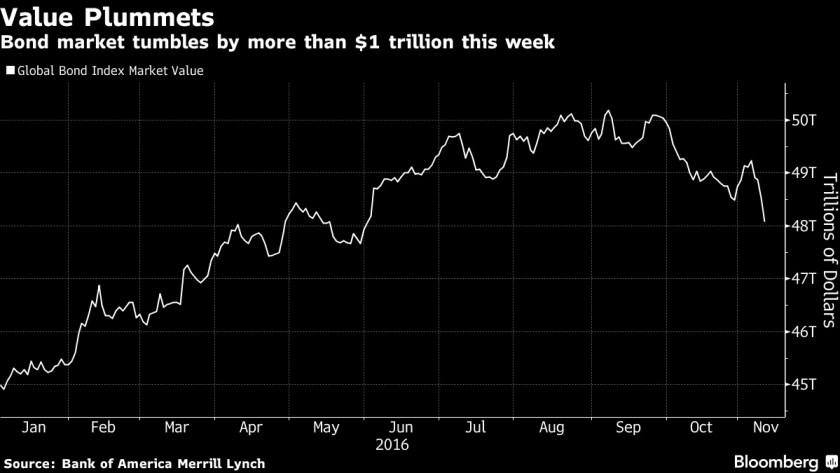 The proximate cause appears to be the concern that President Trump’s economic policies will unleash a debt tsunami required to fund a huge tax cut and massive infrastructure programs at the same time. In fact, the bond market had already started to crumble before the election because it was insanely priced with more than $13 Trillion at negative yields.

If markets were insane before the election as I believe, we have to find a new word to describe the madness that has been unleashed this week; maybe berserk?

Here is the ‘logic’ that seems to be ruling the markets at this moment:

Trump’s policies will result in a net increase in the national debt of $5.3 Trillion according to the non-partisan Committee for a Responsible Federal Budget;

The additional debt will fund more spending by government on infrastructure which will increase real economic growth;

The added spending will also increase price inflation, which is supposedly good for stocks and bad for bonds;

Inflation will force the Fed to raise interest rates more quickly, which is supposedly not bad for stocks and bad for bonds;

The dollar is therefore going higher, which is also supposedly just fine for everyone except gold owners.

There are so many flaws in this reasoning that it is hard to know where to begin.

Does public spending create real, long lasting jobs? The record is not good. The American Recovery and Reinvestment Act of 2009, commonly known as The Recovery Act, was a stimulus package enacted by Congress and signed into law on February 17, 2009, by President Barack Obama over fierce Republican opposition. The cost was estimated to be $787 billion at the time of passage, later revised to $831 billion. The Act included direct spending on infrastructure, education, health, energy, federal tax incentives and expansion of unemployment benefits and other social welfare provision. The ensuing economic recovery was the weakest on record.

Will a Republican House of Representatives approve increased deficit spending when many of them have run against it, as did Trump himself?

Will they vote to increase the debt ceiling, which must be done by March of 2017 to accommodate Trump’s plan? And what is the impact on the Federal budget of soaring interest rates?

Will the Fed raise rates more quickly based on a temporary growth spurt (if it happens) fuelled by more public deficit spending rather than real growth due to increased private investment?

What would be the impact on stocks and real estate of an accelerated cycle of Fed rate hikes? Can stocks continue higher when interest rates on benchmark debt climb? As Ray Dalio says, these rates are built into the valuation of every asset class. Do stocks follow bonds down the drain or is this time really different?

Is the impact of a higher dollar really benign or does it have a negative impact on exports, corporate sales and profits?

Is this the one time in history when the Fed gets ahead of inflation and prevents it? Or will the Fed once again fall behind the curve, allowing inflation to get out of control until a new Paul Volcker comes along?

This is not a return to the Reagan years. Reagan cut taxes but he also cut spending. Reagan came into office when debt levels were a fraction of what they are now, at the beginning of a credit cycle, not the end of one, with the stock market at recessionary lows, not insanely overpriced highs.

We are currently in the grip of a mania. Group think rules the day. It will not last, trust me. And when it turns, it will be like the snap-back of a rubber band…sharp and painful.