Talking heads say the Brits have left the EU. They say that the economic consequences are devastating. They are wrong. Economically, nothing has happened yet and not much may happen as a result of this vote and if it does, it won’t be any time soon and we certainly don’t know what it is. Maybe less money will be invested in UK businesses for the next few months while we wait to sort things out but maybe that’s about it.

The impact on the financial system is another matter. We now have to wait a few days to see what bodies float to the surface. Some of them could be banks. Why? Because financial players were not positioned for Brexit.

There were traders very short volatility (yes, you can do that) which had been a pretty profitable trade until Friday. Volatility had been trending down for months. There were traders short long bonds as part of a trading strategy that assumed credit markets would trade within the ranges of the past few years. There were lots of bets on narrowing spreads that now look much more risky. There were people long the British pound and the euro.

Traders have been taking more risks and using more leverage to increase their returns in a low-yield environment. With the sudden increase in volatility, their capital requirements go up. They may need to come up with more collateral. They may get margin calls.

Watch the banks. European Central Bank monetary policy with its negative yields on Treasuries and even negative interest rates on deposits have squeezed the margins at EU banks who are also stuffed with Treasury debt, not all of it low risk German. The bank stocks looked especially terrible on Friday. Are they telling us something? Let’s see what floats to the surface. The financial implications are just beginning.

The last time the EU banks got into serious trouble, Mario Draghi saved the day by saying he would ‘do whatever it takes.’ And then, he did just about anything anyone could think of to prevent a banking collapse and preserve the euro. What does he do for an encore? More of what hasn’t worked? More asset purchases and even more negative rates? Probably. Do you still hesitate to own gold, dear reader?

Here is a daily chart of EUFN, an ETF of European financial stocks. It fell 16.6% on Friday on record volume. 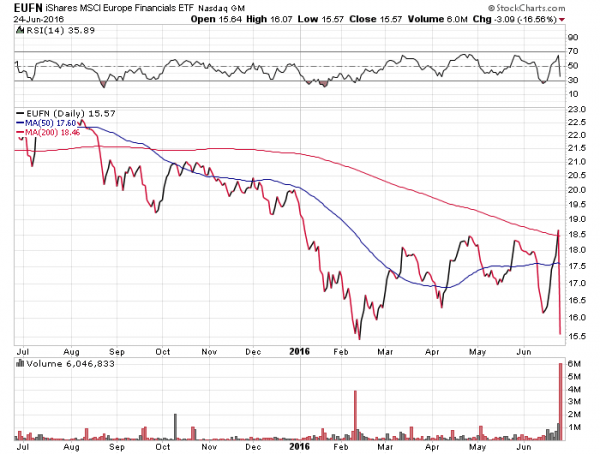