As we noted in our posts on June 25 and July 1, the real consequences of the Brexit vote are not economic…they’re financial. The vote was a surprise and it caught many people leaning in the wrong direction. Because today’s financial system is levered to the eyeballs, wrong bets are not easily corrected and can quickly lead to a crisis.

We have already noted that the banks are one casualty. More on them in a minute. New cracks have also begun to appear in U.K. real estate, one of the world’s most overpriced markets. Four U.K. real estate funds — Aviva, Standard Life, Henderson and M&G — have now halted redemptions. They were running out of cash due to large withdrawals by investors. Perhaps regulators should have wondered how an open-ended fund, in which retail investors can demand their money back on short notice, could possibly work for assets like property that take a long time to sell?

Probably none of you remember…but I do…that in 2007, Bear, Sterns had to close two small in-house hedge funds dealing in esoteric mortgage products that suddenly proved to be illiquid when investors wanted to exit. It was as clear a signal as you could want that the markets were about to come unglued, although it took almost another year to get there.

What are the signs of approaching trouble? Risk aversion and illiquidity in markets because these are the stuff of panic. In the good old days, you would get a market correction, maybe a short recession, and then up and away again. But not now. We have been too long without a recession, too long without a real correction. Shrinking interest rates have pushed leverage to enormous levels to squeeze a better return out of shrinking interest rates. Bad bets have been piled on top of bad bets without a purge and reconciliation. Refinance and drive on. Why take the write-downs now when cheap money is still available?

The Italian Banking Crisis (read at your peril)

Nowhere is this more true than in the Italian banking system. Years of lax lending standards left Italian banks ill-prepared for the economic slump in 2008 that sent bankruptcies soaring. Italian banks simply rolled over loans when borrowers weren’t repaying on time, hoping an economic upswing would take care of the problem. It didn’t. In Italy, 17% of banks’ loans are now non-performing (NPLs). That’s nearly 10 times the level in the U.S., where even during the worst of the 2008-09 financial crisis, NPLs were only 5%. Among publicly traded banks in the euro zone, Italian lenders account for nearly half of total bad loans.

The European Central Bank began supervising the euro zone’s largest banks in 2014. The ECB applied tougher criteria than the Bank of Italy did for determining impaired loans. The result is that impaired loans at Italian banks now exceed €360 billion—quadruple the 2008 level—and they continue to rise. Assuming proper accounting, the Italian banking system now has negative equity.

Bank attempts to unload bad loans have largely failed, with the banks and potential investors far apart on valuations. Banks have written down nonperforming loans to about 44% of their face value, but investors appear to believe the true value is 20% or 25%, implying an additional €40 billion in write-downs. One reason for the low valuations is the enormous difficulty in unwinding a bad loan in Italy. The courts take eight years, on average, to clear insolvency procedures. A quarter of cases take 12 years.

The fear now is that Brexit will further shake the confidence of Italians in the euro zone, leading to a bank run that could cause a financial system melt-down. There are good reasons to fear this. About €187 billion of Italian bank bonds are in the hands of retail investors whose holdings would be wiped out by a resolution under the new EU rules which require so-called bail-ins for insolvent banks (capital contributions from creditors) rather than taxpayer bail-outs (think Cypress).

Last year, more than 100,000 investors in four small Italian banks that were wound up saw their investments wiped out. Some lost their life savings. The controversy exploded in December after Italian news media reported that a retiree committed suicide after losing €110,000 in savings invested in one of the banks.

The Italian government is seeking EU permission to inject €40 billion of public money into its banks to recapitalize and stabilize the system. The EU is opposed, primarily due to German intransigence. Italian Prime Minister Matteo Renzi pressed the issue in his recent meeting with German Chancellor Angela Merkel. “We worked to set down certain rules about bank resolution and bank recapitalization,” Ms. Merkel said last week in Brussels. “We can’t do everything again every two years.” Instead, EU officials say bank supervisors might need to declare some lenders insolvent and impose losses on investors first.

Renzi’s response was a shocker. After Brexit, he said, the real threat is if the local population wakes up to the risk of holding their savings in a financial system that is now teetering on the edge. Italy needs “a liquidity backstop to contain investor panic, which could result in a run on deposits and affect banks’ liquidity.”

So what is the impact of Brexit? Maybe an Italian banking crisis? In the current over-leveraged and fragile financial system, the real problems are rarely where you expect, dear reader. 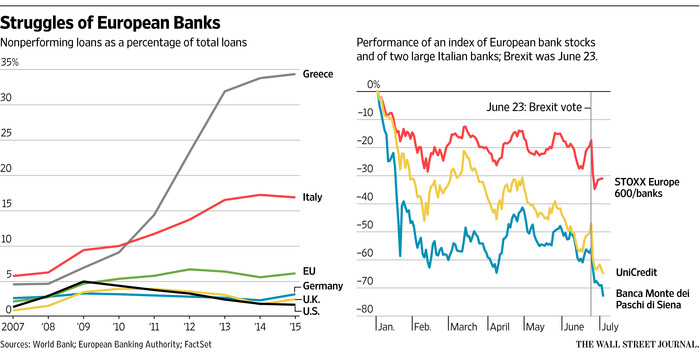