You may remember, dear reader, that I have called a bear market for equities. How am I doing so far? Well, the S&P 500 is up 13% from its February 11th intra-day low (1812). That sure doesn’t look good, does it? But I’m still convinced I’m right. I haven’t shorted the market yet, and won’t until the S&Ps break that February low. So this rally hasn’t hurt me, it’s just annoying to have to wait.Maybe Wall Street still has inventory to unload, as David Stockman says.

The signs of an impending flush are now everywhere. The March 15 release of business sales for January, for example, showed another down month. The critical inventory-to-sales ratio for the entire economy is now at 1.40—–a ratio last recorded in May 2009.

Here’s the chart from Zero Hedge: 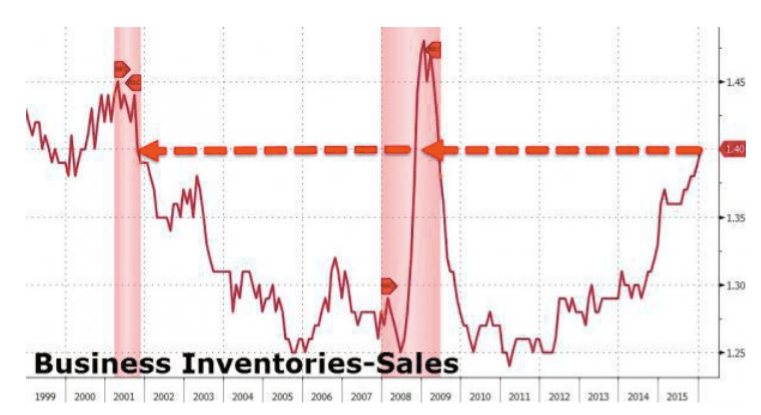 Once upon a time, when I was a young lad, investors used to watch the real economy, not the latest Fed head jabbering on CNBC. One of the things we paid keen attention to was the inventory-to-sales ratio because we knew that’s where recessions came from, and recessions were not good for the stock market.

When sales slow down, inventories build up. The build in inventories actually continues to boost GDP because the supply chain hasn’t got the message yet. When they do, they stop producing as much, inventories fall faster than sales and the GDP falls, giving us an official recession…ALWAYS after the fact. Those who watch GDP, like most economists, totally miss the boat. They never call the recession before it starts because they follow their models and not the real economy. Only highly intelligent and educated people can be this stupid, as I am fond of saying.

Business sales as reported on March 15 were down by 5.1% from their July 2014 peak. Declines of this magnitude have occurred only twice since 1992 and both times they signalled a recession.

Here is the chart of total business sales for all levels of the economy. Is this hard to understand? 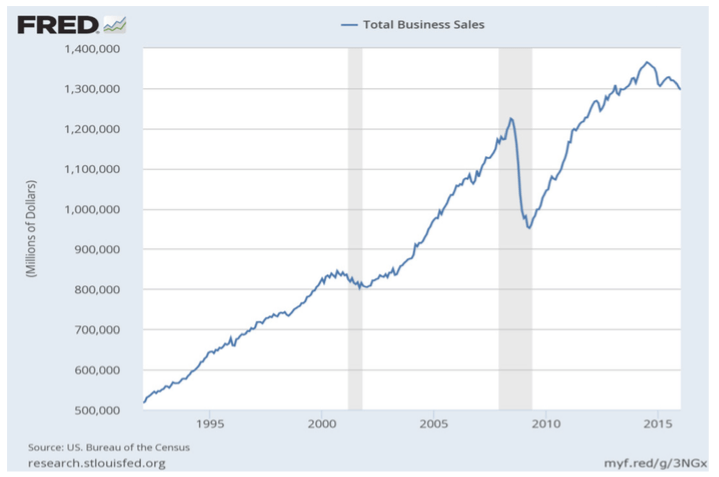 If you haven’t sold your stocks yet, the gods of the markets are giving you another chance, just an eyelash below the all-time highs. Accept the gift, dear reader, accept the gift.