Central banks became net buyers of gold in 2010 and their ownership has increased every year since then. But not Canada. Canada’s official international reserves last released by the Bank of Canada (BofC) on February 23, 2016 show gold reserves at zero.

Canada held some 1,023 tonnes in 1965. That was the top. By 1985, Canada’s holdings had fallen to 500 tonnes. Canada is now the only G7 nation that does not hold at least 100 tonnes of gold in its official reserves. According to statistics from the World Gold Council (WGC), Canada now ranks dead last out of 100 central banks, behind Albania at number 99. This will not end well, dear reader. Count on it.

Here is the latest data on Canada’s official reserve holdings: 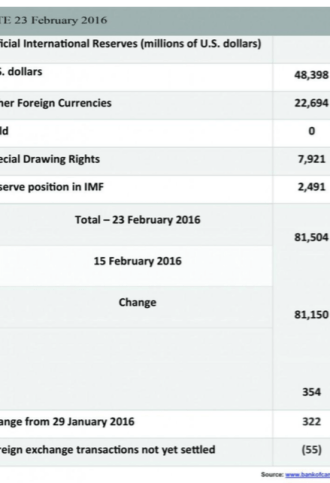 The BofC’s reasoning for selling its gold was a “long-standing policy of diversifying its portfolio by selling physical commodities (such as gold) and instead investing in financial assets that are easily tradable and that have deep markets of buyers and sellers.”
This reasoning is simply retarded. First, gold is not a commodity, it is money and has been for thousands of years.

Second, the gold market is more than deep enough and tradable enough to remain as a reserve. Gold is traded daily on the currency desks of major banks around the world, putting it in the same category as the US dollar, the euro, and other currencies. The physical gold market is estimated to have an average daily turnover of around US$24 billion daily in both cleared and uncleared OTC markets, according to statistics from the London Bullion Market Association. This makes daily gold turnover trading in the London market on par with major currencies and larger than all bond markets except for US Treasuries and the Japanese government bonds.

Gold continues to remain an integral part of central bank reserves and the IMF’s Special Drawing Rights (SDRs), along with other currencies. Gold can be included in bank liquidity buffers under Basel III regulations. This is an important distinction, because it means private banks can hold gold as a reserve liquidity asset. Central banks, according to statistics from the WGC, hold roughly 32,739 tonnes of gold, of which the IMF holds 2,814 tonnes as of February 2016. The largest reserves of gold remain in the US with the Federal Reserve (Fed), which holds 8,133.5 tonnes according to WGC’s statistics.

Another argument as to why the BofC doesn’t hold gold came from Don Drummond, Chief Economist at Toronto-Dominion Bank. He said it didn’t make any sense to hold gold because it hasn’t delivered a good rate of return over time. Since 2000, gold has returned 335% vs. 36% for the S&P 500 and 59% for the S&P TSX Composite. Since the world was taken off the gold standard in August 1971 by former US President Richard Nixon, gold has gone from US$35/ounce to about US$1,270/ounce today, a return of 3,528%. The Dow Jones Industrials closed at 898 on August 31, 1971 and today sits at about 17,000 for a return of 1,793% before reinvestment of dividends.

In short, Canada’s reasons make no sense at all. Meanwhile, here’s a list of future winners. 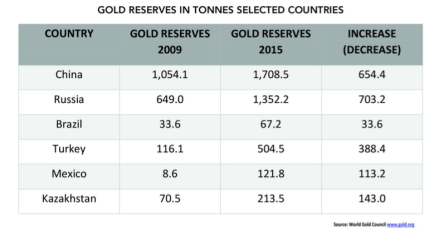