Investors seeking an explanation for the relentless sluggishness of the U.S. economy should not look outside the U.S. for answers. The following excerpt from a 2014 commentary by Dr. John Hussman gets to the root of the problem in a single sentence.

“When the most persistent, most aggressive, and most sizeable actions of policymakers are those that discourage saving, promote debt-financed consumption, and encourage the diversion of scarce savings to yield-seeking financial speculation rather than productive investment, the backbone that supports a rising standard of living is broken.”

It continues. January orders for nondefense capital goods excluding the volatile aircraft category—the best available indicator for capital investment–were down 7% from the year ago peak, reverting to levels first reached in early 2000. There is absolutely nothing in this chart to indicate that “escape velocity” is at hand; everything suggests that the next leg is likely to be down. 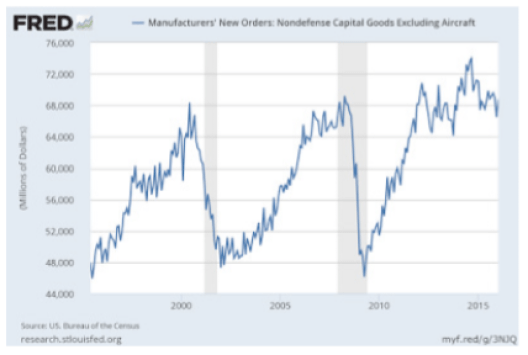 Moreover, the above graph is in nominal dollars and reflects the gross capital outlays planned by U.S. companies. Real CapEx data (chart below) is no higher today than it was 18 years ago and it is nearly 20% below the peak reached in the year 2000. I’ll bet you didn’t hear that on CNBC. 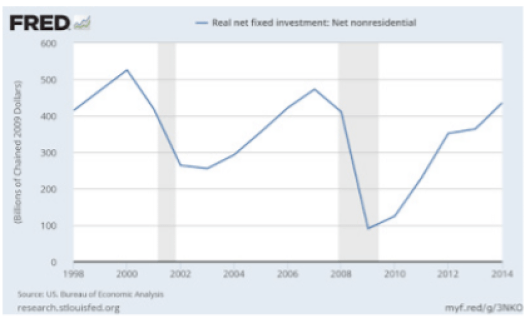 But it gets even worse. More than $1.5 trillion of plant, equipment and other tangible capital assets
are consumed each year in the process of production (it’s called depreciation), meaning that until this capital is replaced out of gross CapEx, the output capacity of the US economy is actually shrinking. And that is why the U.S. economy is going nowhere and labor productivity is falling like a rock. Stock buybacks get the money; capital investment does not.

Here’s the data from the most recent full quarter. According to the U.S. Bureau of Labor Statistics, enough jobs were added to increase hours worked by 3.3%. However, The Bureau of Economic Analysis reported only a 0.1% increase in output. Therefore, inescapably, productivity declined by 3.0%, as the below chart shows. 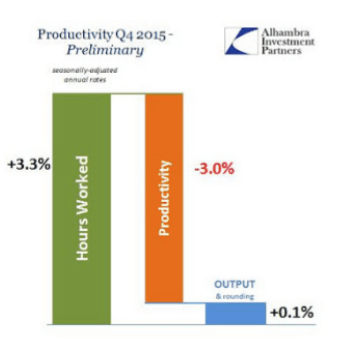 The U.S. economy is not investing enough in itself. That is why the economy is slowing and earnings are trending down, with share prices soon to follow.