The world’s central bankers have spent the last seven years pushing interest rates toward zero and below. At the same time, millions of financial operators and capital users have scoured the globe looking for ways to profit from it. Their favourite method was to create and sell higher yielding debt to institutional and individual investors anxious for income.

In late August, one of their creations blew sky high when the 9.5% contingent convertible bond of 2049 issued by Bremer Landesbank (BLB), an obscure German bank, plunged 40% from 120 to 73 in just minutes—–a move which has, in turn, spooked broader global markets.

Bremen LB is a $29 billion German state-owned bank heavily invested in shipping loans that is now facing massive write-downs and the need to raise capital from its principal owners—-German Landesbank NordLB, the city of Bremen and the savings banks of Northrhine, Westphalia. This bank sits at the end of a long daisy chain of financial foolishness which is the direct result of central bank policy.

Yield-hungry capital in a world without yield hooked-up with a growing surplus of shipping “new builds”, funding on high leverage what is ultimately a day-rate commodity (shipping capacity) highly contingent on the health of the world economy.

The daisy chain originated when central banks made cheap debt available to households in the US and Europe to overcome the recession of 2002. That caused a consumption boom and an oversized growth in Chinese exports. More cheap capital from Asian central banks funded an artificially large investment boom in China which, in turn, caused demand for bulk, crude oil and container ship capacity to surge.

Needless to say, still more cheap capital generated a massive excess of highly-leveraged ship-building capacity. So the huge state-funded ship-building industries of China and South Korea built new ships like there was no tomorrow, and to move the iron, they priced their product near marginal cost.

Even then, the daisy chain was not done. The banks and other intermediaries who bought and financed the surplus ships that the central bankers indirectly built funded their newly acquired “assets” with yield-bait like the Bremen LB contingent bonds which blew up on a moment’s notice.

The one thing that is absolutely true in a $300 trillion global financial market is that Bremen LB is not a one-off. After a $20 trillion central bank printing spree and 90 months of essentially free money, these explosive devices exist in the tens of thousands.

Soon we will know their names. Not all of them will be German.

There is nearly $3 trillion of junk debt outstanding in the U.S. alone, and that is double the level of 2008 when the great financial crisis began. But double the money means more than double the risk. Central bank induced compression of benchmark sovereign bond yields has been transmitted into ultra-low junk bond yields. Essentially, the spreads over the benchmarks have remained the same but the base has dropped immensely. Compared to all of modern history, current junk bond yields in the 5-6% range are just plain ridiculous. The extraordinary yield compression over the past five years can be seen in the chart below. 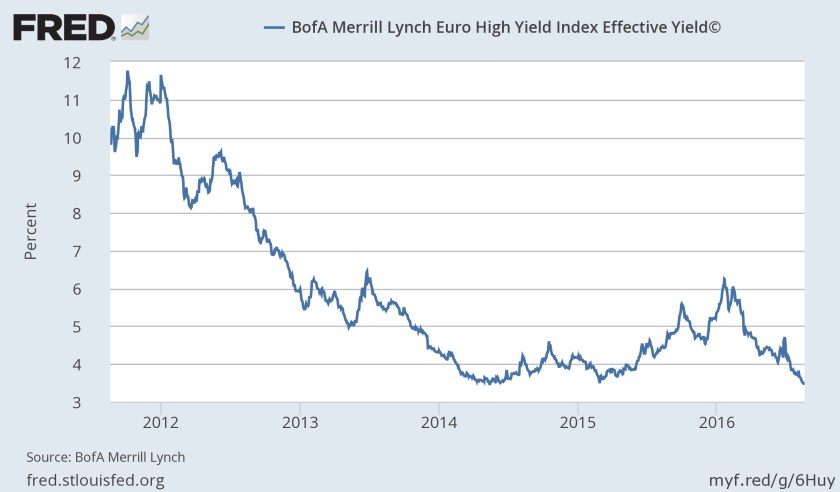 Long-term junk bond defaults have historically been in the 3-4% range, inflation is still running close to 2% on a trend basis and taxes have not yet been abolished. So the sheer math of it is that the average single B junk bond today has negative real yield——and that’s before the next default cycle kicks into gear.

And believe me, record levels of junk bond defaults are coming. That’s because the reach for yield has been the most extreme in history. A very substantial portion of current junk credit has been used to fund radical speculations like Bremen, in the shale patch, commodity plays, subprime auto lending, stock buybacks and dividend recaps by highly leveraged companies. Accordingly, the embedded credit risk in the $3 trillion of outstanding U.S. junk debt is off the charts.

But as usual, the rating agencies are far behind the curve. Standard and Poor’s, for example, projects that by June 2017, defaults will only hit the 4-7% range. That’s assuming a normal credit cycle and that’s not what we are in. I’m expecting junk defaults will exceed the 2010-11 peak of 12% which was generated by the fallout from the financial crisis.

In my opinion, junk debt created by central bank policy, human greed and stupidity is going to bring the system down one more time.