So here we are, heading into Q1 earnings season. This is going to be interesting, dear reader. The omens are not good. The market has been on a roll since the February low, it’s been one of the strongest rallies since 1933, volumes have dried up, the short covering is over and here we sit, waiting for the numbers. This market looks fragile to me.

We have already had three straight quarters of declining S&P earnings. Will we get a fourth? It’s baked in the cake, dear reader. All we need now is to see the market’s reaction.

For Q1 2016, 94 companies of the S&P 500 have already issued negative Earnings per Share (EPS) guidance. Only27 companies in the index have issued positive EPS guidance. If 94 is the final number for Q1 negative EPS guidance, it’s the second highest total since 2006. The record is 95 and I’m willing to bet we beat that number next week. 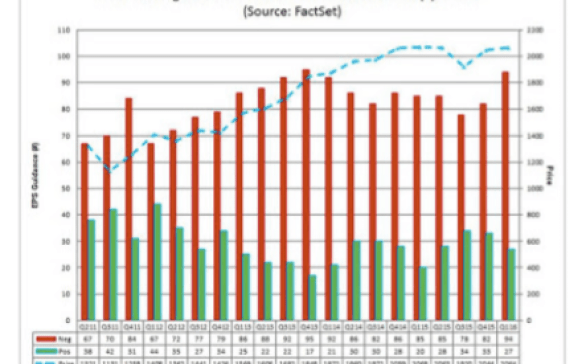 Which sectors lead in negative guidance? The Information Technology (25), Consumer Discretionary (18), and Health Care (17) sectors have the highest number of companies issuing negative EPS guidance for the first quarter. This is not surprising, as these three sectors have historically had the highest number of companies provide quarterly EPS guidance on average.

What is surprising is the number of Health Care companies issuing negative guidance for Q1 (17), which is more than 50% above the five-year average for the sector and a new record. The strong dollar was cited by most of these companies as the main reason for falling guidance. That’s what you call a lame excuse since the dollar hit its high nearly a year ago and has been drifting since.

As I said earlier, the market looks vulnerable here, just a few percentage points off its all-time high. It needs to move higher or fail. Q1 earnings could be the catalyst.