Finally, the monthly jobs report starts to make a little sense. Today, the much-anticipated April report from the U.S. Bureau of Labor Statistics showed a net gain of 160,000 jobs in the U.S. economy, well less than the 200,000+ expected. Goldman Sachs yesterday upped their estimate for today’s report to 245,000! Nice call.

At last, the employment data is beginning to reflect the rest of the economic data.

The problem I have with the government’s employment data is that it just doesn’t coincide with anything else. If the U.S. economy on average has really been employing an additional 200,000 people, month after month, as the government claims, why have retail sales slumped, household incomes stagnated and GDP trended down? I believe the numbers are so massaged by statistical algorithms that they no longer mean anything. And this is the report that the Fed says it relies on most for setting monetary policy.

Another odd anomaly is that the weekly initial jobless claims do not square with the layoff reports from Challenger Gray & Christmas, the ‘de-hiring’ specialists. You would think that the ongoing lay-offs in the energy and manufacturing industries, which are now on an upward trend, would result in a growing number of new claims for unemployment insurance. They don’t.

Here is the lack of agreement in visual form: 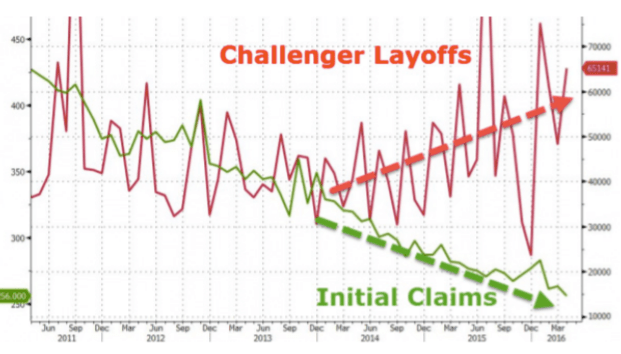 One thing is certain: when a company announces it will lay-off thousands of employees, they do so. The economists who suggest that all is well with the U.S. labor market based on falling initial claims reports need to explain the latest report from Challenger according to which the pace of downsizing increased in April, jumping by 35% to 65,141 from the 48,207 lay-offs announced in March.

As the saying goes, if you pay someone not to understand something, they won’t. Our economics profession either works for the Fed or Wall Street so they can’t have negative views.

In the first four months of 2016, employers have announced a total of 250,061 planned job cuts, up 24% from the 201,796 job cuts tracked during the same period a year ago. This represents the highest January-April total since 2009, when the opening four months of the year saw 695,100 job cuts in the aftermath of the biggest financial crisis in modern history.

And it isn’t just energy. John A. Challenger, CEO of Challenger, Gray & Christmas, noted that “we continue to see large scale lay-offs in the energy sector, where low oil prices are driving down profits. However, we are also seeing heavy downsizing activity in other areas, such as computers and retail, where changing consumer trends are creating a lot of volatility.”

High tech, the presumed engine of growth, is cutting jobs? Yep. Computer firms announced 16,923 job cuts during the month, the highest total among all industries. That includes 12,000

from chipmaker Intel, which is shifting away from the traditional desktop and laptop market and toward the mobile market. To date, computer firms have announced 33,925 job cuts, up 262 percent from a year ago, when job cuts in the sector totaled just 9,368 through the first four months of the year.

Another prime example is IBM, where unconfirmed reports estimate as many as 14,000 layoffs in the first quarter (not included in the Challenger reports because it has not been officially announced).

How is it that these laid-off people do not apply for unemployment payments? Do they just disappear? Inquiring minds want to know.