There is no better indicator of the health of the US economy than housing. Not that it should be so important. But America is a consumer society and housing is the biggest ticket item there is for most people.

On March 21, we got the existing home sales data for February. Demand for housing shocked to the downside. Existing home sales fell 7.1% with all segments of the market showing weakness. Median prices fell 1.4%. On a seasonally-adjusted annualized basis, the sales rate was 5.08 million units compared to the consensus 5.305 million units.

Econoday noted that the numbers were “much lower than expected and well below Econoday’s low estimate for 5.200 million…The report is weak throughout with single-family sales down 7.2 percent, at 4.510 million, and condos down 6.6 percent at 570,000. All regions show declines in the month…The weakness in this report, described as ‘meaningful’ by the usually upbeat National Association of Realtors, is substantial and, like last week’s drop in housing permits, represents a downgrade for housing, a sector that was supposed to be a leader of the 2016 economy.”

Here’s the chart. Note that a falling mortgage interest rate didn’t help at all: 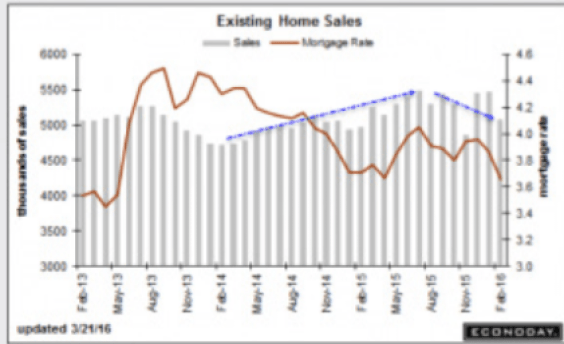 Averaging things outs, you can clearly see sales accelerated from February of 2015 through June of 2015. Since then, sales have decelerated.

Now, before you try telling me housing is only one industry, here is the data for February from the Fed’s Chicago National Activity Index also released on March 21. After January’s hopeful spike to a six month high, the index plunged back into contraction near the two year low and well below the lowest forecasts: 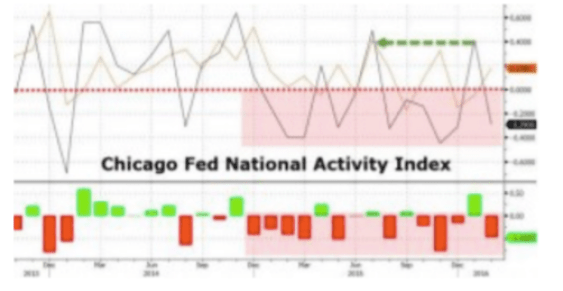 An amazing 58 of the 85 individual indicators in the index were down. This decline wasn’t about any one thing, it was about almost everything.

Upcoming is the most obvious-to-see recession in U.S. history but the Fed still doesn’t see it.