I think that this Wednesday, the Fed is going to threaten to raise interest rates in September. Why? Three reasons. First, the Brexit shock has evaporated. Second, stock markets have just made new all-time highs. Third, the economic data hasn’t been as bad as expected; we have seen a second quarter bounce after a terrible first quarter.

Now, please be assured that I do not expect a rate increase in September. This is just the Fed trying to make us believe that they are not powerless, that they haven’t been wrong about the U.S. economy and that they have options. It’s an exercise in credibility management. As soon as they threaten to raise rates, the stock market will start to crumble and that will be that. No rate hikes.

This is the goofy game we are in. The Fed can only raise rates when markets are strong because markets think they won’t raise rates. If the markets think the Fed will soon tighten, they will go down, starting with the overheated bond market. So, the markets want to hear that the economy is relatively strong but not strong enough for the Fed to raise rates. On the other hand, the markets cannot be allowed to think that the Fed will never raise rates because that would mean there is something seriously wrong. Got that? It’s all about expectations, never about the facts.

Here is why the Fed thinks it can threaten a rate hike on Wednesday: over the last three weeks, the Volatility Index (“VIX”), which measures how much investors will pay for options that protect the value of their stocks (and thus reflects fear in the markets), has fallen faster than at any time in history. So, investors are now sufficiently comfortable that a September rate hike can safely be mentioned. 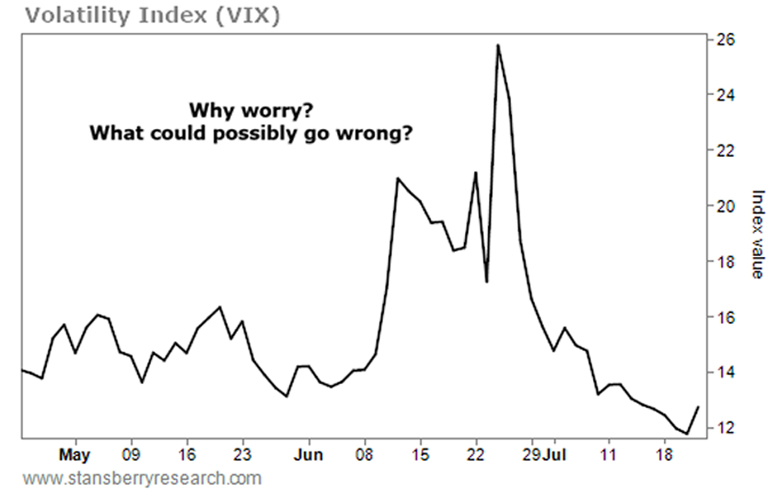 Just three weeks ago, the VIX spiked to almost 30 on fears that the “Brexit” vote would result in a severe European banking crisis. But then the VIX simply collapsed as central banks in Japan, Europe and China came up with more stimulus. Based on this index, investor sentiment looks to be euphoric.

What does this mean for traders? First, don’t buy the equity rally…it’s likely over. Second, my guess is that we are now about to see the meaty portion of the gold and gold stock correction that I talked about last week. A rate hike threat is just what the doctor ordered to get gold longs to panic and gold shorts to pounce.

In my next post, I’ll tell you why I think the economy is not getting stronger. It’s called the traditional second quarter dead cat data bounce…it’s happened every year since 2010…and it never lasts.