On Friday, we get the April jobs report from the U.S. government. This report may matter more than most.

The Fed always notes that a strong labor market is necessary for more rate hikes. In the past several weeks, we have heard a number of Federal Reserve governors telling us that a rate hike at their FOMC June meeting is possible. In my opinion, that’s about as likely as a snow storm in July. Friday’s jobs report will make this clear.

Second, we have the ADP report that came out today and its estimate for new jobs created in April was decidedly bearish. The ADP national employment report is based on approximately 400,000 U.S. business clients and approximately 23 million U.S. employees serviced by ADP, a private payroll company. They calculate that 156,000 private sector jobs were created in the U.S. in April, well below the downwardly revised 194,000 in March, also well below the consensus estimate and the lowest total since 142,000 reported in February, 2014. Here are the headline numbers:

ADP’s reputation as a leading indicator of the official numbers from the Bureau of Labor Statistics isn’t perfect but ADP has been on a four month hot streak. Here’s a chart showing the fairly close approximation between ADP and BLS reports. 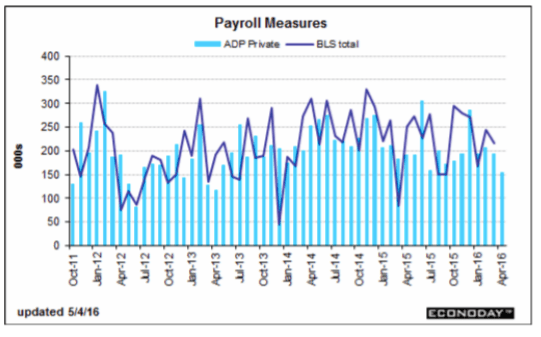 Is bad news still good news? Does the stock market celebrate a poor report as another reason why the Fed won’t tighten? Or do investors decide that one more bad report is one too many and throw in the towel? Stay tuned.