The stock market ripped higher again yesterday. The last couple of days, the Nasdaq, Nasdaq 100, Dow and S&P, have gapped higher with the former two making new highs. Why? Apparently because Trump’s tax plan is about to be revealed. Do we need to be reminded that Trump’s health care, extreme vetting, infrastructure and border wall initiatives have all failed? Thank goodness for Syria and North Korea, where Trump can make decisions without Congress.

One thing is certain. The stock market is not up because the economy is improving. Economic conditions are significantly worse this year than they were last year. Consider the chart below. The red line is CitiBank’s U.S. Macro Surprise Index which consolidates all the economic news releases and deducts the downside surprises from the upside surprises. Historically, stocks go up (the green line) when economic data surprises are mostly positive. Not now. Surprises have turned down and are now nearly negative on balance but stocks are not. 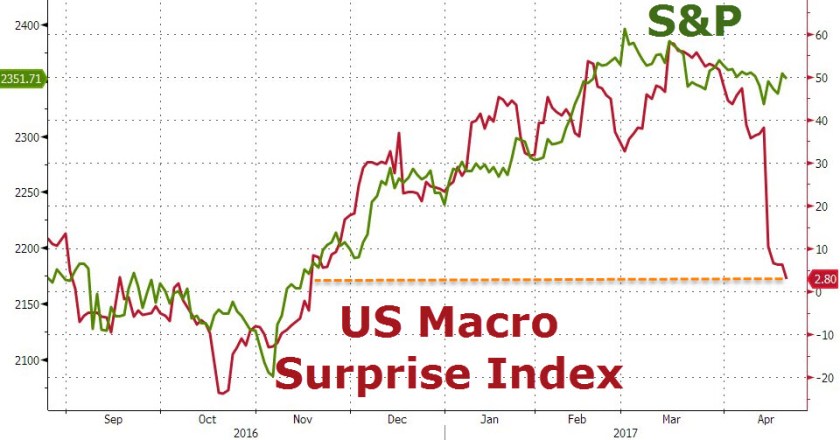 U.S. economic growth for the first quarter will be close to zero, thousands of retail stores are closing, factory output is declining, and restaurants and automakers have both fallen on very hard times.  Commercial and consumer bankruptcies are rising at rates that have not been seen since the last financial crisis.

Here are the latest indicators to cross my desktop:

The number of retailers that have filed for bankruptcy so far in 2017 has already surpassed the total for all of 2016.

The Atlanta Fed’s GDP Now model is projecting that U.S. economic growth for the first quarter of 2017 will come in at just 0.5 percent.

Restaurants are experiencing their toughest stretch since the last recession. Foot traffic at chain restaurants in March dropped 3.4% from a year ago.

In March, U.S. factory output declined at the fastest pace in more than two years.

I know I sound like a broken record here, but this cannot continue dear reader. When this heads south there will be no bids left to prevent a crash. The shorts have been destroyed more times than I can count. Margin debt has set new records. Cash positions in mutual funds are at all-time lows. ETFs are attracting all the buying and they have no flexibility to pull back as valuations go to beyond crazy levels. If you have not sold and gone to cash, please hover your finger permanently over the sell button and do not go to sleep.

Go to cash, you may ask? Yes, cash (and some gold). When the market falls by 50%, the value of your cash doubles. Where else do you think you can double your money in this market?

Whether this latest surge is the last stage of an exhaustion process or the beginning a full-blown blow-off lasting some days or weeks (which will then end in exhaustion), I can’t say. But I can say that I have never seen episodes like this end well. The stock market is beginning to feel like March 2000 to me, and that was the end of a mania, not the start of a new bull phase.