Do you know how bad the U.S. economy is performing? Over the last four quarters, real GDP is up just 1.2%, the lowest annual rate since 2010. Last Friday, we learned that first quarter real growth was marked down to 0.8% while the second quarter was only 1.2% compared to expectations of 2.6%. In fact, new data marked down performance all the way back to early 2013.

The Fed has been telling us that the economic slowdown was transitory and all would be well. They had no clue. Or they lied. You choose. Here are the numbers, which clearly reflect that the trend has been down since Q3, 2014:

This is an ominous chart, dear reader. Why, you may ask? Because the last good quarter of growth coincides with the end of Quantitative Easing. I think this means that QE or something similar is coming back. As the economy slip-slides away from them, the Fed will feel compelled to do more of the same even though it clearly hasn’t generated a self-sustaining recovery.

Since the recession ended seven years ago, the expansion has failed to achieve the breakout seen in past recoveries. The average annual growth rate during the current business cycle remains the weakest of any expansion since at least 1949. If the U.S. economy had recovered its growth path prior to the recession, the U.S. economy would have generated almost $7 trillion in additional wealth over the past seven years.

When the Fed said the U.S. economy was approaching escape velocity, the growth rate was actually contracting. In Q4, when the Fed announced its first rate hike in nine years, revised data show that the trend was clearly down. Strong GDP reports that the Fed relied on for its rate hike rhetoric such as the 3.9% alleged growth in Q2, 2015 have now been slashed. Downward revisions to previous GDP estimates primarily reflect falling residential fixed investment, private inventory investment and exports (mostly good stuff), partly offset by higher non-residential fixed investment, personal consumption, government spending and imports (mostly bad stuff).

Does this look like the escape velocity the Fed has been promising for the economy since 2010? 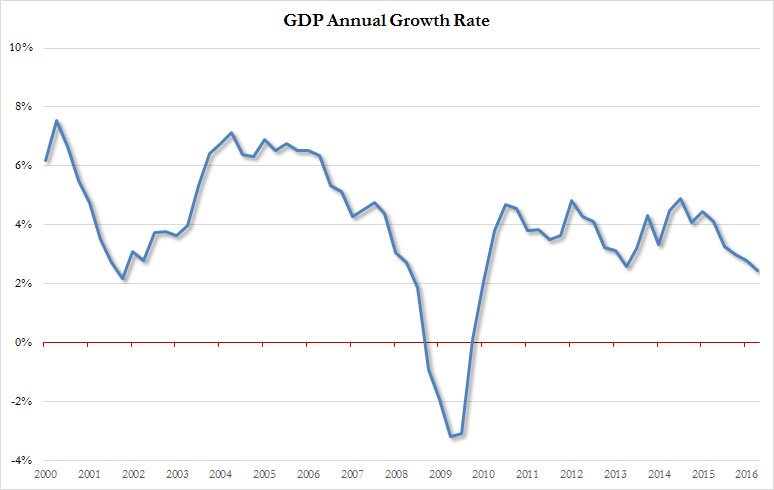