Unfortunately, most of the information we get on the U.S, economy comes from the federal government. As I have said previously, this data is so messaged by higher mathematics that it has become meaningless or misleading.

Fortunately, the private sector also produces data that does not serve a political agenda. One such source is the monthly Cass Freight Index produced by Cass Information Systems from data provided by America’s 400 largest truck and rail shippers. The most recent monthly report for April was published last Friday. Traditionally, trucking and railroad activity has been a key indicator of the health and direction of the U.S. economy.

You are about to see a chart that is undeniable evidence that we have entered a major economic slowdown. 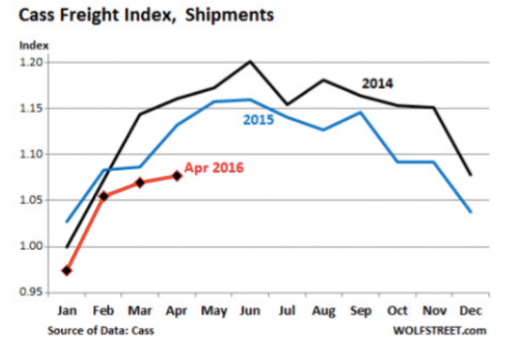 This is not a seasonally adjusted index so you can clearly see the seasonal variations in shipping activity. The red line shows the level of activity for the first four months of this year. You can also clearly see that the trend is sharply down since 2014. In fact, the first four months of this year are the worst since April of 2010. The reality is that we have now seen the Cass Index decline on a year-over-year basis for 14 consecutive months.

In 2007-2008, there was a similar decline in this Index but the Federal Reserve and other “experts” assured us that there was not going to be a recession. Then we immediately proceeded to plunge into the worst economic downturn since the Great Depression of the 1930s.

Just because stock prices are artificially high right now does not mean that the U.S. economy is in good shape. In fact, there was a stock rally at this exact time of the year in 2008, even though the underlying economic fundamentals were rapidly deteriorating. We all remember what happened later that year.