Lately, I’ve been reporting to you on the troubling slow-down in auto sales and production. Is this data trying to warn us about a wider slow-down?

As we have noted, so-called ‘soft’ economic data in the form of surveys of businesses and consumers has been far more positive than ‘hard’ data such as retail sales and industrial production. Eventually, this gap has to close. And it looks like it is. The hard data, not surprisingly, is the winner. The soft data is starting to correct downward. 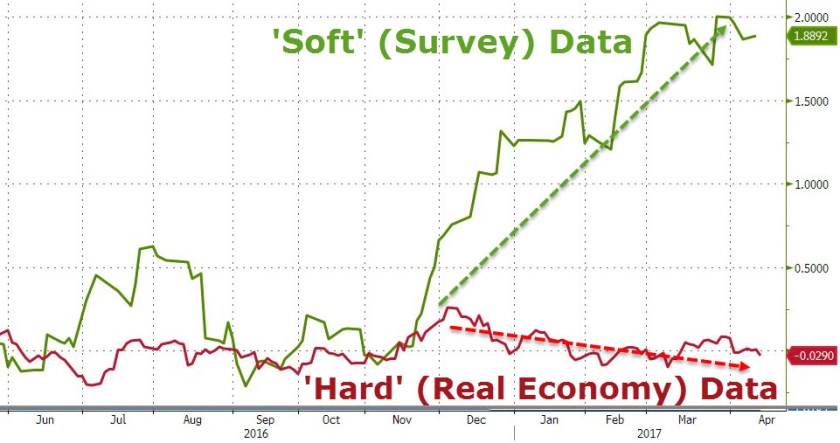 As evidence, below is today’s release of the Fed’s April Empire State survey which asks a sample of New York state businesses to respond to a monthly questionnaire. 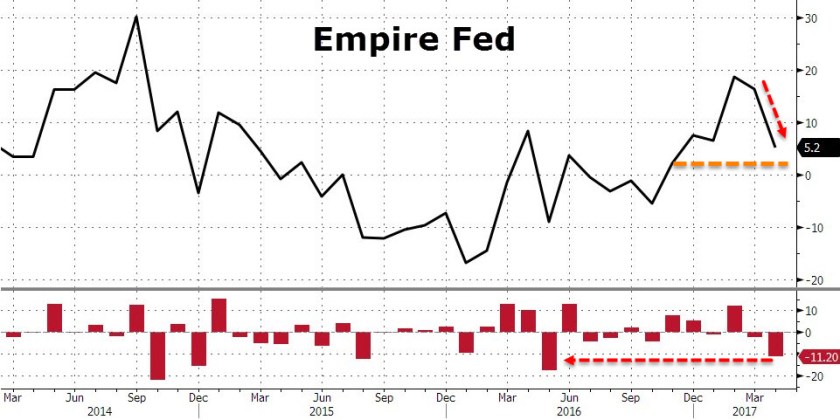 Is the Empire data an anomaly? You be the judge. Wells, Fargo, America’s largest mortgage lender, just reported its worst mortgage data since the 2008/9 financial crisis. In Q4, Wells’ residential mortgage applications plunged by $25 billion from the prior quarter to $75 billion. Their mortgage origination pipeline plunged by nearly half.

Did the first quarter numbers recover as expected? NO. Wells just reported that its Q1 mortgage applications fell a whopping 23% from Q4 to just $59 billion, a fresh low since the financial crisis. And the pipeline also fell again, in line with the lowest numbers reported this decade. 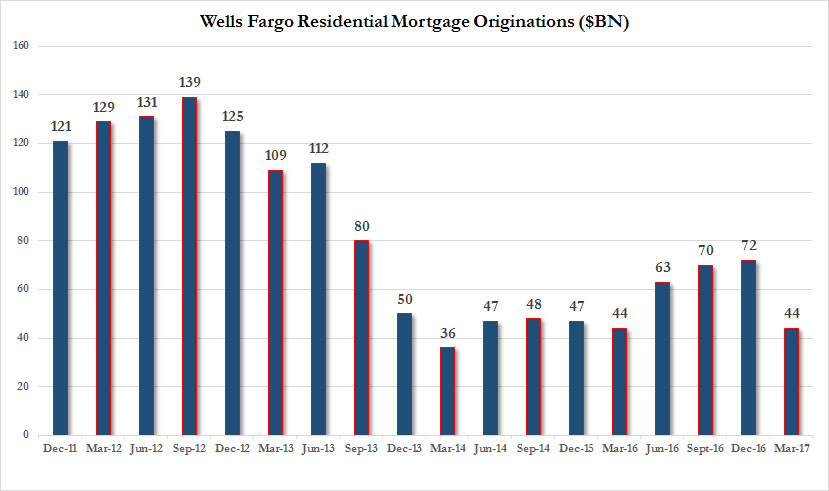 What these numbers suggest is that the average U.S. consumer cannot afford a mortgage when rates rise by as little as 1%. But the Fed is intent on raising interest rates more. What do you think happens to the U.S. economy if both the auto and housing industries hit the wall?

Here’s another leading indicator. For the 12 month period ended March 31, total federal revenues, tracked as government receipts on the Treasury’s statement, were $3.264 trillion. This amount is 1.3% lower than the $3.31 trillion reported one year ago. This is the fourth consecutive month of declines and the biggest drop since the summer of 2008. Every time since at least 1970, when government receipts have turned negative on an annual basis, the U.S. was heading into a recession. The last time government receipts turned negative was in July, 2008.

It looks to me like the stock market is ignoring very important real data in favour of let’s pretend. It reminds me of Wiley Coyote chasing the road runner off a cliff. Mr. Coyote thinks he’s fine but he hasn’t looked down yet. When he does, he is very likely to fall.