Who has been buying stock and driving equities higher? The answer may surprise you. According to Credit Suisse strategist Andrew Garthwaite “one of the major features of the US equity market since the low in 2009 is that the US corporate sector has bought 18% of total market cap, while institutions have sold 7% of market cap.”

As the amazing chart below shows, since the financial crisis there has been only one net buyer of stock…the companies themselves, who have engaged in the greatest debt-funded buyback spree in history thanks to the easy money policies of the central banks. 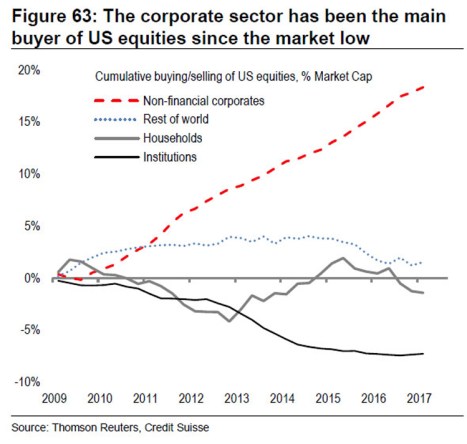 When companies buy back their own stock, they artificially boost their earning per share by reducing the number of shares outstanding. Why would they do this? As Reuters explains: “Stock buybacks enrich the bosses even when business sags.” That’s a major reason why this economic ‘recovery’ has been marked by very weak capital investment. Why would corporate managers take risks to invest in new plant and equipment when the real money is made in buybacks, mergers and acquisitions, and cost cutting that boost share prices and the value of executive stock compensation?

Since 2009, we have seen relentless selling by institutions and a persistent unwillingness by households to put any new money into the market. The money that has flowed into the stock market has been borrowed in the bond market. Interest is tax deductible, rates are historically low and demand for new debt is insatiable. Who cares if balance sheets are weakened by record levels of debt? Today I get paid. Tomorrow can look after itself.

As always, dear reader, follow the money. The stock market is not at new record highs due to a strengthening economy or better bottom lines. The incentives are all lined up to compensate the rich and take the economy down.