Readers will be familiar with the GDPNow estimates published regularly by the Atlanta Federal Reserve. These estimates have been the most accurate out there, quarter after quarter. The latest forecast for Q1 GDP is just 0.4%, despite the most benign winter weather in decades.You may remember that the “polar vortex” phenomenon was said to have been the reason for lower GDP in Q1 of 2014 and even 2015. This year, you can expect that the unseasonal warmer weather will be the excuse for poor growth because it has suppressed parka sales and home heating and utility revenues. You heard it here first.

This latest markdown in GDPNow estimates for Q1 reflects another set of weak economic reports. If you are keeping score at home, here are the reports the Fed says are responsible for taking down their forecast from just under 2% on March 15 to 0.4% today:

The result of this run of terrible data is clearly evident in the chart below: 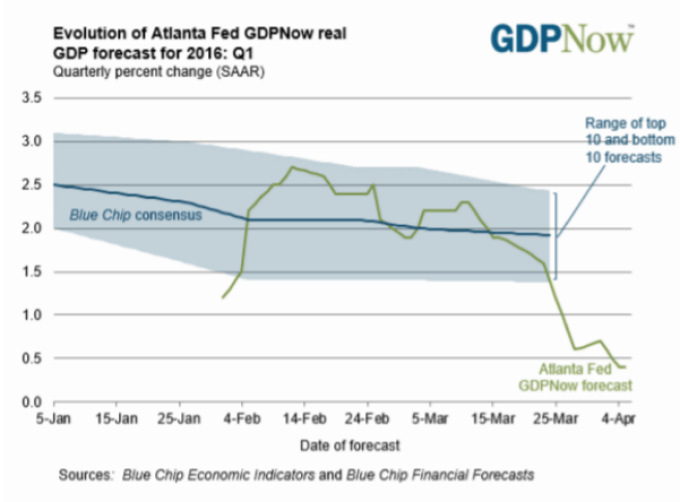 Wake up and smell the recession, people. This is no time to buy the S&Ps.