Political commentators seem unable to understand why Bernie Saunders and Donald Trump have managed to tap into such rage among average American voters. The talking heads just assume the headline economic numbers reported by Wall Street are real. The economy is fine and getting finer, right? Wrong, and Americans know it.

One of the great lies is in the monthly jobs report. It’s not that the headline numbers are made up. The problem is what the numbers don’t tell you…that the new jobs are mostly not good jobs. That is why household incomes are not growing, average families are slipping behind in their bills and people are getting frustrated and angry. It’s a problem of quality.

In the main, these are not good-paying jobs. To raise a family, you may need at least two of them, and many workers have more than one job. They are offsetting quality with quantity.

Where do the people taking these jobs come from? Often, from better paying jobs such as in manufacturing where the layoffs continue.

As shown in the chart below, in the past month 29,000 manufacturing jobs were lost. This was the single biggest monthly drop in the series going back to December 2009. 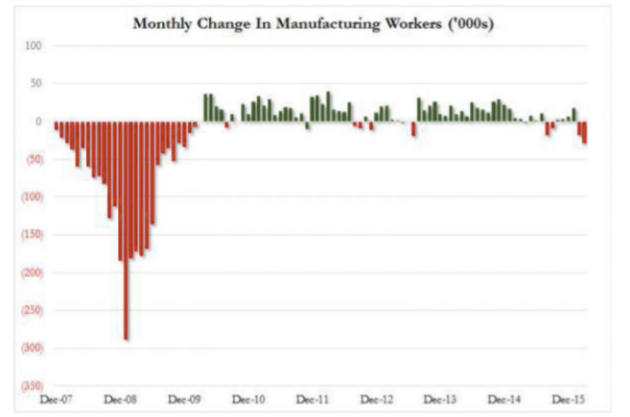 As the predominance of red over green clearly shows, the manufacturing jobs lost in the Great Recession have not come back. And since the start of 2015, 24,000 manufacturing jobs have been lost compared to an increase of 365,000 food service workers. If Americans did not eat out every day, many of them wouldn’t be working either.

Last month, nearly every laid-off manufacturing worker seems to have found a job as a waiter. In March, workers in the “Food services and drinking places” category, waiters– bartenders and cooks– rose to a new record of 11,307,000 workers, an increase of 25,000 in the month, just about offsetting all the lost manufacturing jobs. 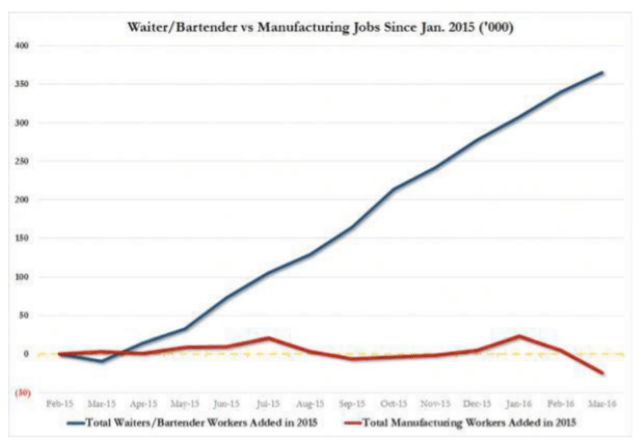 If I went from earning $25 an hour in manufacturing to a minimum wage job at the local diner, I would be voting for Trump too.