We are watching the major stock indices flirt with new highs but not quite making them. Most players now seem to be thinking it’s only a matter of time. But the smaller companies may be telling us otherwise.

Smaller companies are more sensitive to business conditions so they often signal weakness before larger companies. Right now, they may be doing just that. The S&P 500 index of very large US companies has just rallied 14.9% off its February low, climbing to within 1.3% of its all-time high. That’s why investors are turning bullish. As DailyWealth Trader points out, this is the second attempt at new highs in the past six months. 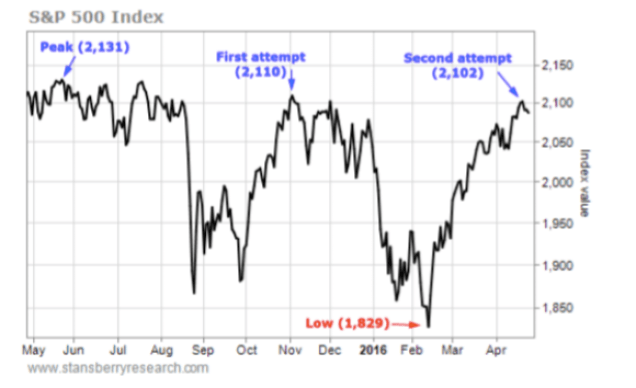 But the performance of the S&P 500 is not being matched by the Russell 2000 index of smaller public companies. The Russell just rallied an impressive 20.2% off its recent low but it’s still 11.5% below its 2015 high. That’s a major divergence. As Dr. John Hussman (my favourite economist and fund manager) points out, bull markets are marked by convergence, where the indices move together, not apart. Here’s the chart for the Russell2000 over the same timeframe: 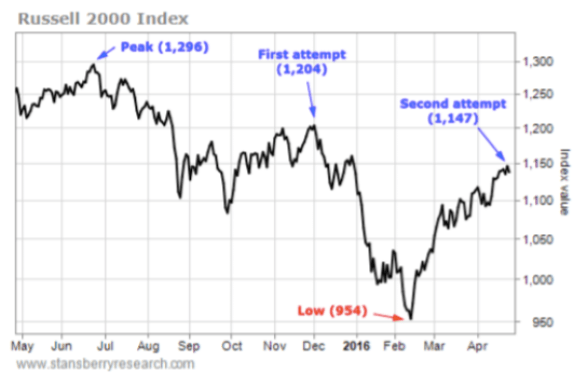 History tells us this particular divergence is important.

In 2000, after the tech bubble peak, the S&P 500 dropped sharply but then rallied. It rose 12.1% off its low to within 0.4% of a new high. Traders expected the bull market to continue. But the Russell 2000 was saying something different. The Russell’s second rally attempt was an enormous 119.6% off its low but it was still more than 10% below its peak. The market then crashed.