So let me understand what you just told me. You said you bought back into commodities because central bank stimulus and a weaker dollar are boosting copper and oil and all that other good stuff. Have you LOST your MIND?

There is way too much capacity in commodity production thanks to far too much cheap money for far too long being invested in far too many big projects. There is way too little demand to absorb this supply and demand is getting weaker. The commodity super cycle has become a death spiral with the occasional bounce designed to kill off more speculators.

Crude oil has rallied enough to register technical warnings. A big swing from oversold to overbought has put lots of momentum in the play and the players couldn’t resist. May often sets a seasonal high. So far, the high has been 46.78 last Friday and Monday oil has declined to the 43 level. Production losses due to the Alberta fire popped the price to 46.06 earlier today but that didn’t last long. There is minor support at the 43 level and more at 40. Both 50 and 200 day moving averages are there. I expect those levels to break.

I don’t know how long it will take, but the 30 level in oil is looking likely. Stories about Saudis turning off the tap are – well – stories. Crude oil is suffering a massive change in technology. It is easier and cheaper to produce oil than it was 10 years ago.

Last year’s rally in base metals (GKX) made it up to the 50 week moving average and expired. That was at 345. The low was reached at 235 in January and the high since then was 278 last Tuesday, somewhat above the moving average. It seems this rally has peaked. The index has dropped to 264. Taking out support at the 262 level would suggest that 235 is likely, which makes it a full round trip.

Here’s a chart to consider…rebar…steel bars for reinforcing concrete. The price is falling out of bed today. So have iron ore futures. They were the first to break down hard after the Fed stopped Quantitative Easing in 2014. They are leading to the downside again. 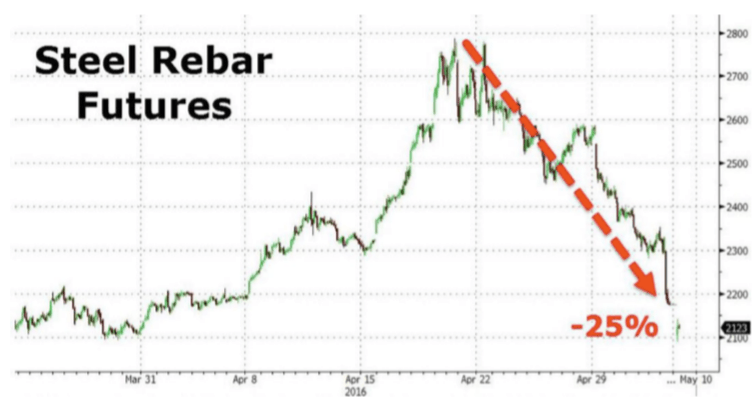