By now you probably know that the US government’s May jobs report released last Friday hugely missed expectations. Only 138,000 jobs were added in May while the previously reported March and April estimates were revised lower by 66,000.

As readers will know, I’m more interested in the reaction to the numbers than the numbers themselves. Friday did not disappoint. Stocks went up. The stated reason? The Fed would likely not raise rates as aggressively. Earlier in the week, stocks were supposedly going up because the Fed was so confident of the economy that they were going to raise rates aggressively. When you are in a bubble, any reason is an excuse to buy. It’s the direction that matters, not the facts. So, the market remains irrational.

Another reaction also caught my eye. Several of the Wall Street and Fed apologists tried to tell us that the report was actually good because we shouldn’t be expecting anything over 100,000 added jobs per month when the economy is approaching full employment. This is quite easily the most stupid ‘happy talk’ I have heard from these people since Trump was elected President. You may remember that the day before the election, a Trump victory (which none of these ‘experts’ predicted) was surely going to destroy the markets. The day after, it was the best thing since sliced bread. The self-serving hypocrisy is sometimes overwhelming. As it is with the commentary on the jobs report.

How is it that in a labor market supposedly near full employment, with an unemployment rate sliding to a post 2001 low of 4.3%, wages simply cannot rise faster than inflation? How is it that the labor participation rate among working age Americans fell again, from 62.9% to 62.7%? These issues are closely related. Because wages are so weak, people are leaving the work force. Why are wages so weak?

The answer is once again to be found in the quality of jobs added. The monthly jobs report has two parts. The Establishment Survey, based on a survey of employers, says that a net 138,000 jobs were added in May on a seasonally adjusted basis. The Household Survey, based on a survey of households, says that a net 233,000 jobs were lost in May and the composition was even more negative: according to the Household Survey, the US lost 367,000 full time jobs in May, offset by a gain of 133,000 part time jobs. 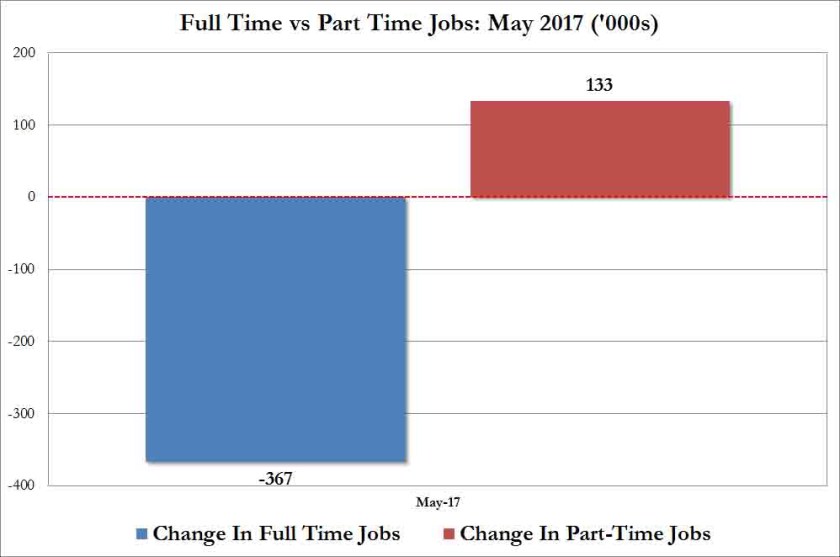 Putting this in context, May reported the biggest drop in full time jobs since June 2014. The result was the lowest annual increase in average hourly earnings since March 2016. The much-heralded bounce in earnings that began this year (primarily due to some states and municipalities hiking the minimum wage) has now fizzled out completely. 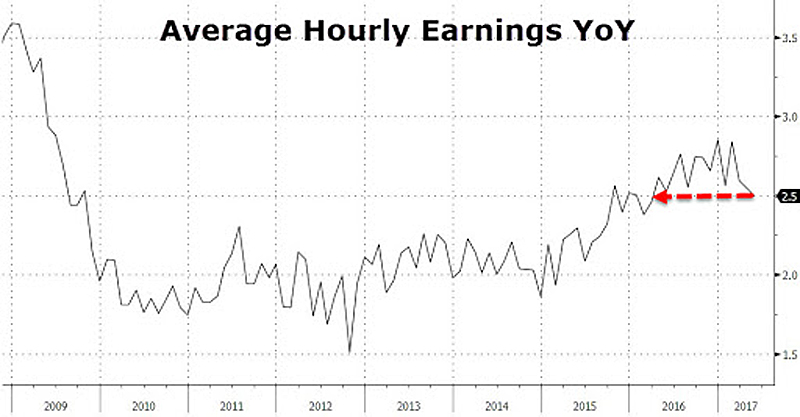 Here is the real story. Starting in March of 2010 and continuing through April of 2017, we have had 87 consecutive months of payroll gains for America’s waiters and bartenders, an all-time record for any job category. Over the past 7 years, the US economy has added 2.378 million waiters and bartenders or just about 15% of all the new jobs created over that time.

More than 102 million working age Americans are not in the work force. That number grew by 602,000 working age people in May. If you have a job, congratulations, you have more dependents every month.

If the markets want to indulge in a blow-off, that’s fine. But we should at least understand that’s what is going on. There is no way you can use the data to justify current valuations. The jobs report was not good, people are leaving the workforce, wages are stagnating and we are becoming a part time, minimum wage economy. Let’s not pretend that this is good for stocks just because this sorry performance could mean fewer Fed rate hikes.