American corporations continue to pile on the debt to buy back shares and acquire each other while earnings are now down six quarters in a row. Is this bothering anyone else?

Corporate leverage has exceeded the levels reached before the 2008 financial crisis. Here is the evidence: 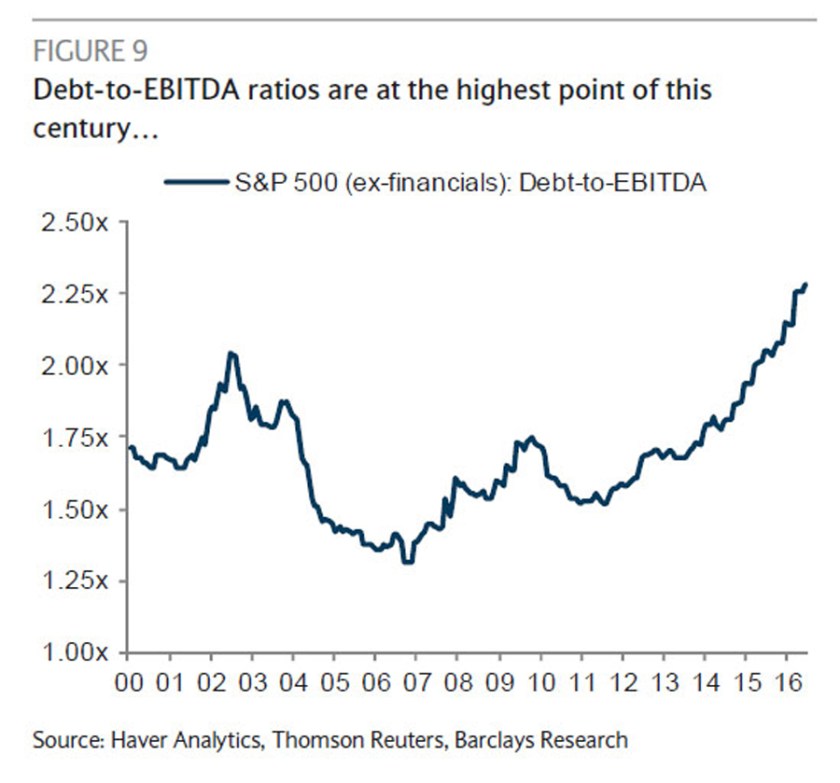 EBITDA is earnings before interest, taxes, depreciation and amortization…in other words, the cash flow available to service debt.

Corporate leverage in America continues to soar to new highs every month. This month, total sales of company bonds in 2016 passed $1 trillion for the fifth consecutive year according to Bloomberg. Total company debt is now at a record 2.4 times collective EBITDA as of June, according to a Sept. 9 estimate from Morgan Stanley. The ratio fell to 1.7 in 2010 when the U.S. economy started recovering from the Great Recession.

Even more disturbing is the declining quality of this debt. Growth in U.S. high yield (so-called HG or junk) debt is unprecedented over the past few years, more than doubling from around $2 trillion at the time of the financial crisis to approximately $5.4 trillion currently. 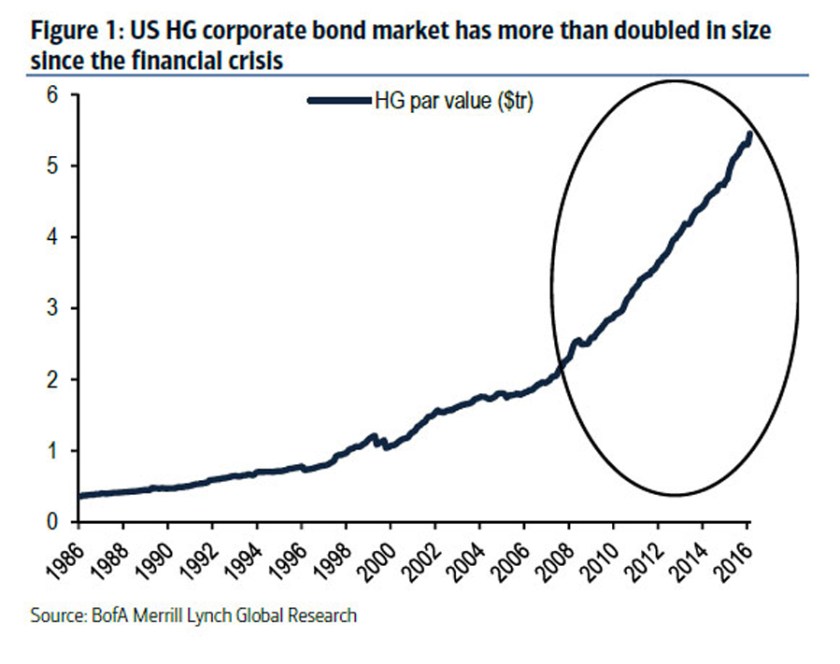 All this is a direct result of Fed policy. Their thinking is that lower interest rates will spur the economy. Rates have been lowered, triggering a daisy-chain of events: low or zero rates have promoted a reach for yield; the reach for yield has lowered capitalization rates across a variety of asset classes which, in turn, has spurred a rise in asset prices. Rising asset prices – the so-called wealth effect – is supposed to “rescue” the economy by rebuilding balance sheets and restoring animal spirits. Therefore aggregate demand is supposed to rise, businesses invest more and a virtuous growth process is launched.

But it hasn’t worked. Asset prices have soared. The 0.1% of the population that owns almost all the financial assets is much richer. But after more than 90 months of zero or near zero rates, economic growth is sputtering, the corporate sector is in an earnings recession and productivity growth is negative. Capital investment has not been encouraged by lower rates but speculation has, unproductive debt has soared and many individual investors have increased their savings…exactly the reverse of what the Fed expects…because they have growing concerns about their retirement in a low interest rate environment.

Fed policy is creating a more fragile and vulnerable economy and financial system. It’s time for a change in thinking. But I fear we will have to experience a financial asset crash first.