Why do you have confidence in the value of the US dollar? Because, you say, it’s backed by the US Government, the most powerful institution on earth, with the biggest military and the most powerful economy. Feels good, right?

But I’m a bottom line kind of guy. Never mind how it feels. Show me the assets backing the dollar. Show me the money, as they say. Let’s look at the asset side of the current balance sheet of the U.S. Federal Government, courtesy of Doug Short of Advisor Perspectives: 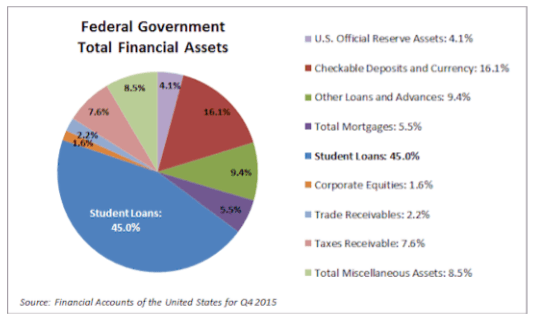 Your dollar is not primarily backed by U.S. Official Reserve Assets (gold officially valued on the balance sheet at $11 billion) or taxes receivable from the world’s best economy. That dollar in your wallet is mostly backed, in asset terms, by student loans owed by mostly unemployed kids living in their parents’ basements. The liabilities are another matter of course, being $19 trillion in debt and counting.

Now, you may want to argue this point. After all, tax revenues come in every day. Consider the income statement, you might say. But on a current basis, the U.S. Federal Government is running a deficit of at least $800 billion annually. And the net present value of unfunded liabilities is $80 Trillion (with a T) and up depending on the discount rate and other assumptions you use. Boston University’s Laurence Kotlikoff, the reigning expert on U.S. liabilities, estimates the NPV at about $200 Trillion.

Oddly enough, you can still trade dollars for gold. Why would you not do this?