In my opinion, the situation is mixed but with a positive bias. The over-extended Large Speculators on COMEX continue to liquidate their positions, exactly what we need to see before the market turns up.

Another positive is that ETF gold holdings have continued to grow throughout this correction. This tells us that there remains a strong bid for gold despite the liquidation by Speculators on COMEX. In fact, we are now seeing an unusual divergence between ETF holdings and the price, a divergence which appears to us to be a positive. 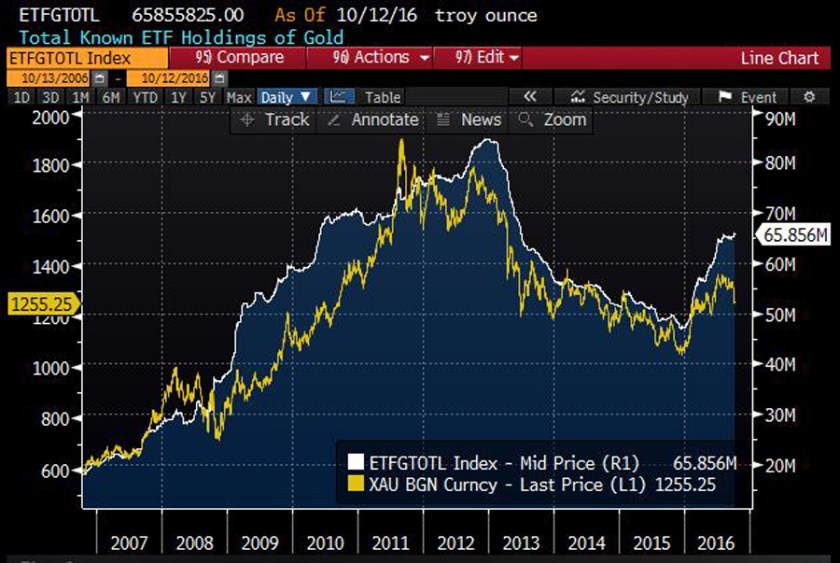 Sentiment readings are also positive. The Hulbert HGNSI Index was unchanged at -33.33% last Friday, the lowest reading for this indicator since -36.7% was hit in early December of 2015. MarketVane’s bullish consensus was unchanged at 52%, also near its lows. Nonetheless, the GLD gold ETF’s holdings rose 3 tonnes on Friday to 962 tonnes.

SentimenTrader’s gold optimism index, or OPTIX for short, is an amalgam of positioning and survey data. It tends to move within certain ranges during bull and bear markets. Just as gold reached its 200-dma last week, the OPTIX also hit the lower level of its traditional “bull market range”: 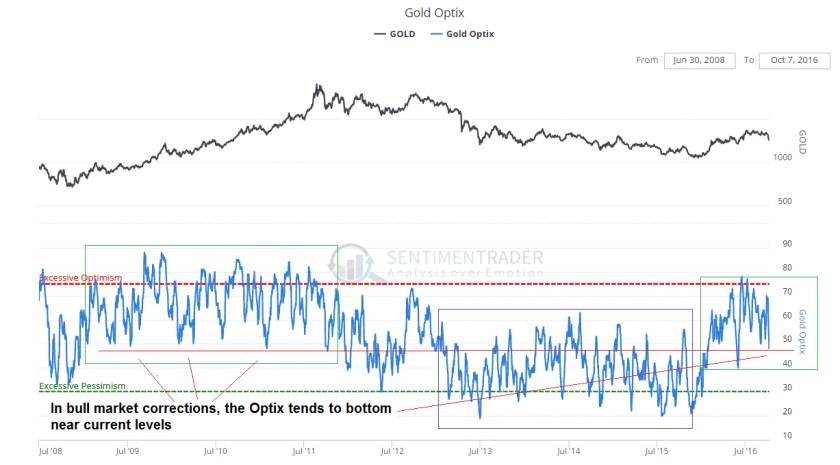 The gold Optix is now right at the level that usually serves as “support” during bull markets.

During gold’s bull market from 2001-2011, the metal rarely spent any time at all below its 200 dma (now at about $1261) other than in 2008 when it spent nearly two quarters below it. Consequently, there’s reason to believe that the metal won’t spend much time below its 200 dma now if this is a new bull market, unless it’s a major correction like 2008.

What are the negatives for gold? The “trigger”, or rationale for the recent sell-off is the increase in odds of a Fed rate hike in December. In the big scheme of things, a 25 basis points rate hike matters little of course. Or let us rather say, it matters only insofar as it will bring the bursting of the bubble in stocks and bonds one small step closer. This in turn would definitely not be bearish for gold. Also note that the last Fed rate hike on December 16, 2015 signaled the beginning of the upturn in gold.

In fact, gold tends to do well when the markets begin to sense that liquidity is evaporating. Gold then begins to very quickly reflect growing expectations that central banks will soon engage in monetary pumping again to counter the decline in asset prices.

What are the negatives? The one thing that is a little troubling is that some of the gold stocks broke to new lows last week (see GOLD and GFI for example). Gold and the miners also don’t tend to like rising long-term interest rates or rallies in the dollar, which we appear to be potentially set up for.

If long-term interest rates continue to move higher this week, as I suspect they will, then I would expect the S&Ps to once again challenge last week’s lows and break them. If that trap door opens, we’ll just have to watch and see what happens, but I doubt it will be pretty. Gold stocks may temporarily share in the pain.