As my friends will tell you, I like walking through malls, looking at the traffic and trying to figure out who’s going to stay in business. I marvel that here I am in another Home Depot with another just down the street and a Lowe’s around the corner. How do they do it, I used to ask? Now I ask an even better question: why?

America is unbelievably overbuilt. This was true before the online revolution and now it is far worse. Commercial real estate (CRE) will change more in the next decade than it has in the past hundred years. Highly leveraged real estate investors and lenders are going to be decimated.

In the past, CRE was nicely divided into nearly airtight compartments; retail was retail, warehouse was warehouse and office was office. Not much cross-over. Now, big box stores are the lowest hanging fruit being picked off by online shopping. Hundreds of millions of feet of well-located space are suddenly becoming available. You cannot fill all of this space with the few big box retail concepts that are still expanding.

As a result, a huge game of musical chairs is about to take place. Why pay $20/ft for mid-rise office space, if you can now move into an abandoned Sports Authority for $5/ft. Sure, it doesn’t come with windows but employees like open plan space and there’s plenty of parking. Besides, with the rental savings, you can offer your staff an in-house fitness facility and a cafeteria for free.

Does your mega-church need a larger space? There’s probably a former Sears or Kmart that perfectly accommodates you at $3/ft. Have an assisted living facility with an expiring lease? Why not move it to an abandoned JC Penney.

Go onto any real estate website and you will find out that large open plan space is nearly free. No one knows what the hell to do with it and the waves of bankruptcy in big box are just starting. As online evolves, these waves will engulf other segments of retail as well. Type Macy’s into Loopnet.com and look at how many millions of feet Macy’s has available for purchase at under $10/ft.

Retail’s problems are about to become everyone’s problems in CRE. When old Macy’s space rents for $2/ft, what happens to everyone else’s rents? What happens if a CRE owner is leveraged at 60% (currently considered conservative) and leasing at $15/ft when old retail space across the street is going for $3/ft?

An office owner can lower his rents a few dollars, but at the new price can he cover his interest cost, much less his other operating expenses? What happens to a suddenly emptying mid-rise office building? It has higher operating expenses than the former box store due to full-time security and cleaning.

And what happens to the banks that have financed these deals? As I noted in my July 8 post, CRE has $3.8 trillion in loans against it, most of it from banks. 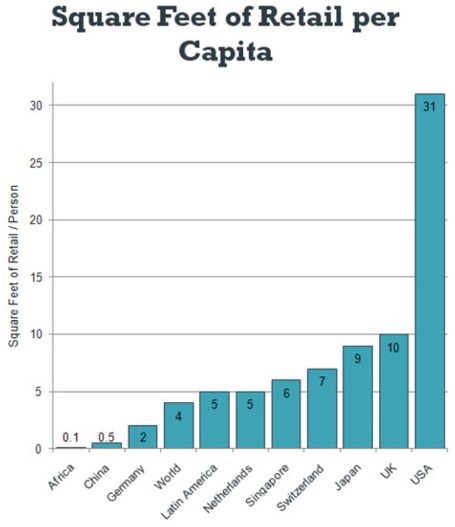 America currently has more feet of retail space per capita than any other country…three times more. America has more feet of office and other CRE types per capita as well. Malls have run out of shoppers for all of this space. Now the malls are empty and the shops are closing. The next step is rents will drop dramatically. The mall owners will go bust followed by the lenders.

This is a disaster in the making, brought to you by your friendly neighborhood Fed. Dropping interest rates to zero has encouraged money to flow to the easy places that can absorb lots of it in big chunks, like malls and office buildings. When the discipline of market-driven interest rates is lost, investors and lenders do stupid things and consumers too, tempted by cheap credit and a boom time atmosphere, put themselves in debt up to their ears. Defaults are on the way. Oh, and don’t forget the plunging tax revenues for the cities and towns that already can’t balance their budgets. And did I mention the millions of lost jobs as well?

It’s been a hell of a party. Now we get the hangover. This one features a row of dominoes that are getting ready to fall.